We own four Austin Eights. The first car is named "Aussie" and is a rare two door four light saloon, build in 1939. The second car is a rare 1939 civilian tourer called Dot. This name was given to the car by the first female owner because of the original licence plate DOT 891. The third Austin Eight is "Pedro", a 1947 left hand drive Austin Eight Van. This is the only left hand drive van known to be in existence. The last car added is an original Austin 8AP military tourer, manufactured in 1940. All four cars are part of the Austin Eight Register.

The pictures below were taken by Hendrik Jan Bakker, on the 3rd of July, 2011, just before we drove the HAV drive. Next to our two door four light saloon, named "Aussie" we have bought a second 1939 Austin Eight. This 1939 Austin Eight Tourer was owned for the last 18 years by Ian Pinniger. Ian has build the Austin Eight register in the 1990's when this car was offered to him. I continue the Austin Eight register of Ian and from now I will keep his car as well. We have picked up the lovely car of Ian in August 2012 from Saint Malo France, where it was brought by ferry from Jersey. The car passed MOT and is licensed in The Netherlands since October 2012. The car was named "DOT" by the first female owner, Joan Nicholls, a district nurse. Joan Nichols purchased the car new in 1939, from Wil Short in Winchester. We are the 4th owner since new. This 1947 Austin 8 van, was added to the Austin Eight Register in 2018 and was imported from Portugal in January 2017. The car only has two registered previous owners and was owned by one family since new. The car was never restored and it is still in its original condition. She is the only left hand drive Austin 8 van known to be in existence.

The car was first registered after WWII in 1947, was used till 1953 and laid down til the 1990's, after which the car was restored. The car has four previous cevilian owners since 1947.

This is us together with our 1939 Austin Eight

Below you will find pictures of our 1939 Austin Eight Fourlight Saloon.

These pictures were taken during the Drie Borgentocht in Slochteren on September 04, 2011. We were dressed in period clothing and therefore we became the 1st place winner that day, out of the 110 cars attending this event.

The 1st place winner had to park the car in front of the historical castle, after which the pictures below were taken. We will receive an original painting for one of the pictures of our choice, made by an original artist. Below you will find pictures of our 1939 Austin Eight Fourlight Saloon.

These pictures were taken during the Drie Borgentocht in Slochteren In September, 2010. We became the 3rd  place winner that day, out of the 150 cars attending this event.

The 3rd place was for the category, most beautiful pre war car. 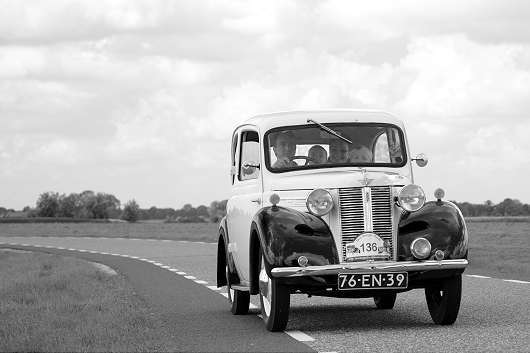 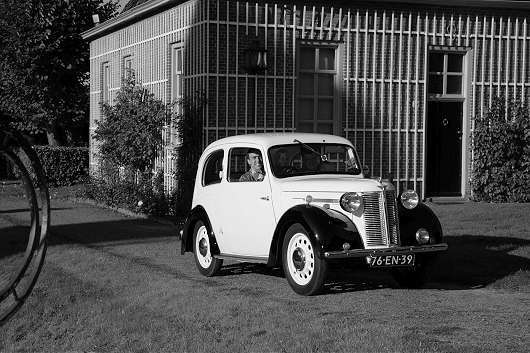 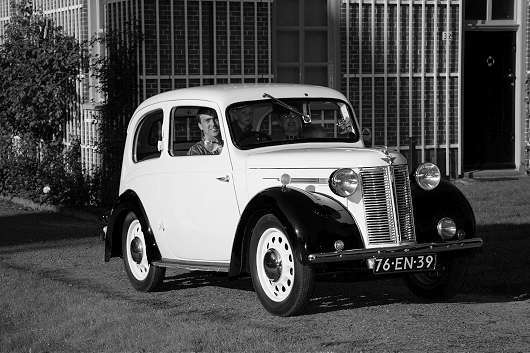 On September 05, 2010, we have been photographed with our Austin Eight. The result was a speed ticket of Euro 30,00. We drove 58 KM/Hrs where 50 KM/Hrs was allowed. In stead of the police giving the car a medal for this excellent performance, a speed ticked was send instead. This ticket was given during the "Drie Borgentocht 2010" classic tour. I have asked the police for proof and the document below, including photograph was send to me. At least we have got a proven document for the excellent performance for the car. If I tell you that the absolute top speed of the car is maximum 50-55 MPH, which means about 75-80 KM/Hrs. Seldom you have to pay speed tickets with a smile, which I have done in this case. Well done Austin.